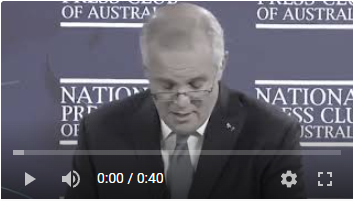 Morrison stinks up the Press Club

It was a nightmare Press Club appearance for Morrison. As well as the revelation of text messages between Gladys Berijyklian and an unspecified Liberal Minister describing him as “a horrible, horrible person”, and “a complete psycho”, he floundered when asked about the costs Australians are paying for basic necessities like milk, bread, petrol, and rapid antigen tests.

Share this video with someone who needs to see it!

Shouldn’t the Prime Minister have a vague idea of the cost pressures facing ordinary Australians? What good is knowing GDP figures if you don’t know that wages aren’t keeping up with the cost of living?

In a few days, his PR spin-doctors will get pictures of him wearing a footy scarf or making a curry on the front page of the Daily Tele, and the Liberals will all relax, thinking they've duped us again.

But they're not counting on the thousands of Australians who have already started having conversations with their friends in WhatsApp channels and social media groups - sharing the truth about Scott Morrison's character.

Well that was fast. Here's Scott Morrison being relatable on 60 minutes, playing the ukulele. Wonder where he might have picked up that skill?