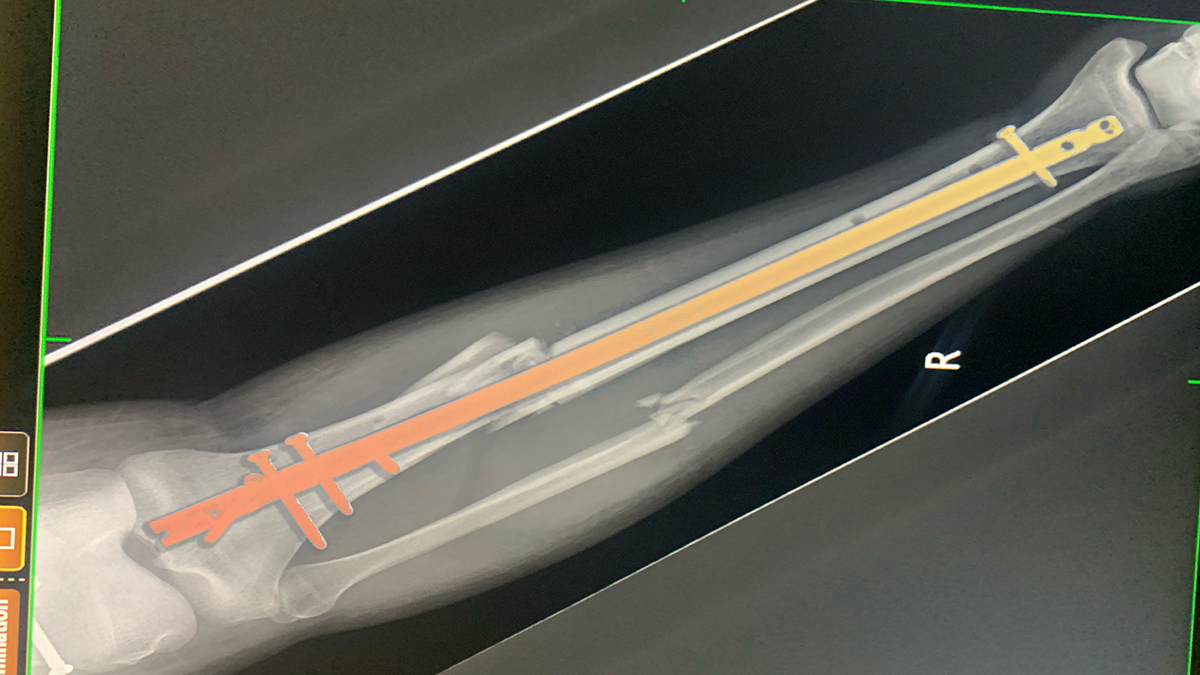 What's it like to suffer a serious workplace injury?

James Crust knows what it’s like to have your life turned upside down by a work injury.

The 42-year-old tow truck driver from Frankston North was on his way to a crash when he blacked out behind the wheel just after midnight on January 27, 2020.

His tow truck crossed four lanes of traffic and a service lane before crashing into a tree and through a fence. He had to be cut out of the wreckage by fire fighters using the jaws of life.

James was rushed to the Royal Melbourne Hospital with a collapsed lung, broken rib and multiple fractures to his right leg and arm where surgeons put his body back together with several plates, screws and rods.

Since then, he has undergone six additional surgeries as he struggled through his ongoing recovery and rehabilitation.

“There have been days where I just didn’t want to get out of bed, and there have been times when I just wanted them to chop my leg off because I was in so much pain,” he said.

“And I still can’t hold anything with my right arm for very long without it shaking uncontrollably, so my injuries have had a huge impact on my life, as well as those around me.”

Even though his injuries were technically the result of a road accident, Workcover took carriage of James’ compensation claim. But although his claim was accepted by his employer’s WorkCover insurance agent Allianz, he said the process since then had been anything but easy.

“There’s been one issue after another and the insurer’s lack of communication or action has been frustrating,” he said.

“First, they refused to acknowledge the hours I worked for my pre-injury weekly earnings, even though it’s in my employment contract, then they took weeks to approve my medication expenses, so I had to pay for it myself until they got it sorted.

“Then it took them eight months to approve and install a ramp so I could get in and out of my house. They sent different builders and occupational therapists around to inspect what was needed, then the builder who got the job started building it in the wrong place.

“Everything has been a lot harder than it’s needed to be and I’ve been the one who’s had to do all the running around for a lot of things, then I’ve been chasing them up for approval, even though that’s what they’re paid to do.”

James’ lawyer, Laura Sibrava from Slater and Gordon, acknowledged the WorkCover scheme was complex, which she said “often adds to the stress already being felt by those going through one of the most challenging times of their lives.

“It’s vital for injured workers to be able to access their full legal entitlements so they can undergo treatment and try to get on with their lives as best they can in the circumstances,” she said.

Dominic Melling Leads Victorian Trades Hall Council's Occupational Health and Safety Team. Today, 1 June, the union movement is observing "Injured Workers Day" to shine a light on the challenges faced by injured workers. “The discussion around workplace injury and illness in Australia is often framed in terms of penalising unsafe workplaces and practices and mitigating risk. And while that’s important, that sort of focus on the duty of care holder largely obscures the impact on injured workers themselves. As a culture, we need to do better at supporting folks who suffer injury at work.”

“Injured Workers Day is an opportunity to shed light onto the plight of some extremely vulnerable Australians who are too often overlooked."
“When you suffer an injury at work, you can easily become isolated from your usual social networks and support. You may not be able to participate in the hobbies or social activities you are used to. It’s like being in lockdown, but ongoing, while the rest of the world is moving on.”

Join us from 12:30pm at Solidarity Hall in Melbourne for presentations from injured workers, WorkCover experts and other guest speakers, or watch the livestream on facebook. Recording of the livestream available here.