Portrait honouring Gwen Goedecke to be unveiled at Trades Hall

A ceremony honouring Gwen Goedecke’s life-long contribution to the Victorian union movement will be held this Saturday at Trades Hall. Acting Secretary Wil Stracke will unveil a portrait sculpture in bronze by artist Gray Nicol. 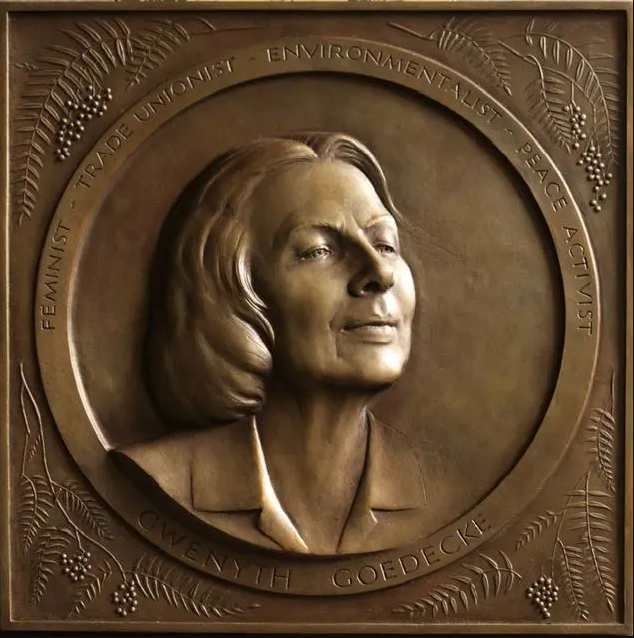 Born in 1922, Gwenyth Goedecke grew up in Melbourne's working-class Western suburbs. She was introduced to politics via militant articles in her Uncle Jack's union paper, The Maritime Worker. A scholarship to the Zercho Business College facilitated her entry into paid employment under advertising agent Val Morgan, then operating radio station 3KZ at Trades Hall.[1]

In the 1960s her home in Footscray was the headquarters of the western suburbs branch of the Communist Party of Australia and was regularly filled to capacity with unionists and political speakers. This experience likely informed her later efforts to secure funding for public meeting spaces for working-class communities in Melbourne’s west.[2]

She was active in the Victorian chapter of the World Peace Council, an international organisation dedicated to peace activism and disarmament. As the Electorate secretary to Dr Jim Cairns, Federal treasurer in the Whitlam government, Goedecke played a significant organising role in the Melbourne Vietnam moratorium marches in Melbourne. Goedecke was also a member and employee of the Victorian Peace Council and the Campaign for International Cooperation and Disarmament.

In 1974 Goedecke was part of a group of artists, unionists and other community activists who secured state and federal funding to found Footscray Community Arts.[3], a unique initiative intended to make art and culture accessible to marginalised and disadvantaged communities in Melbourne's west.

In 1975, working with union women's committees and Dr Jim Cairns, she helped Secure Federal funding for Mary Owen to establish the Melbourne Working Women's Centre, [4] and she later founded the Western Region Centre for Working Women in Footscray.

From 1984-1987 Goedecke was the second female councillor on the Sunshine City Council.

She was honoured in the 2009 Victorian Honour Roll of Women.

In Gwen’s final years, she learned that a community house she had established in Sunshine with a grant from the Whitlam Government had quietly slid into private hands. Despite being frail and worried personally about the fallout, she decided she could not rest until that asset was returned to working people. Gwen arranged the sale of the property and donated the proceeds to the Trades Hall Council and Literary Institute of Victoria, preserving the Whitlam grant for working people into the future.