Confronting the fash in Australia 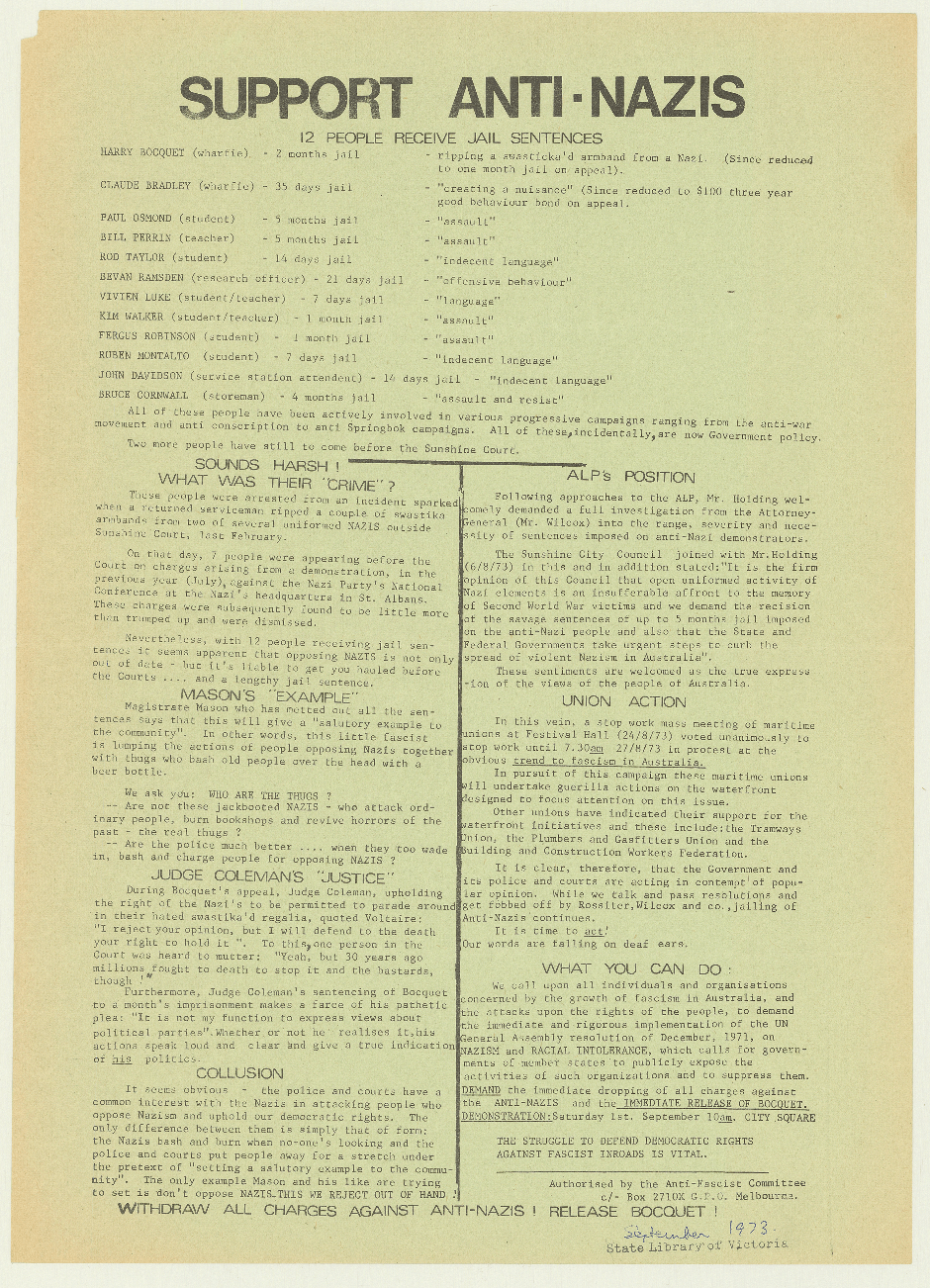 A union flyer opposing the jailing of anti-fascists in 1973. View at the State Library of Victoria.

From inside the CFMEU offices on Elizabeth Street, I watched as a crowd of hundreds of hi-vis clad men spewed vitriol at union leaders and demanded the shutdown of the construction industry. Amongst the obvious opportunistic anti-vax ring-ins and the well-known far-right provocateurs, I saw people who genuinely were construction workers, even some union members.

It was deeply disturbing to watch this crowd rampage through Melbourne for a week terrorising people - openly using neo-Nazi symbols and gestures, desecrating symbols of our democracy - and know that there were people among them I would have once called comrades.

The organised far right in Australia is tapping into fear in our communities. They are weaponising the cautious, precise language of scientific experts to sow uncertainty and doubt in public health messages, and co-opting democratic values (like “free speech”) to spread conspiracy theories and promote a darkly fascistic agenda amongst everyday Australians.

There are monsters among these groups. But the crowds are not monsters.

Since the siege on the CFMEU offices, I have sought and received opinions from thousands of union members about Covid vaccine requirements in workplaces. The overwhelming majority of union members support vaccination and understand the need for continuing public health measures, but there are also those who do not want to get vaccinated and who feel under threat.

For those workers who have been exposed to vaccine misinformation, getting vaccinated feels like too high a price to pay for workplace safety. They are scared of the vaccine, worried about losing their job and income, and feel alienated from the majority of their workmates. Most unions staunchly back vaccination as an essential requirement of safe workplaces and as an act of solidarity with our health workers, but to vaccine refusers this feels like betrayal. They are easy pickings for the far right, and as a result, Australian families are losing their loved ones to conspiracies and fascism.

I use the word fascism deliberately, because although the riots in Melbourne appeared chaotic and disorganised, pulling in a motley mix of anti-vaxxers, white supremacists and others, the common thread was authoritarianism. They targeted a union office in order to force their fringe agenda onto the whole construction industry by threatening the union’s democratically elected leadership. They assaulted journalists who were there to cover the protests, because they object to independent scrutiny of their actions. They converged on the Shrine in the hope of appealing to nationalist militaristic sentiment - desecrating, in the process, a sacred monument that commemorates tens of thousands who died fighting fascism. They marched on parliament, an obvious target to those who decry the legitimate health directions made through democratic process. Despite their use of anti-authoritarian rhetoric and appeals to “freedom”, what unites these disparate groups is an interest in undermining trust in democratic institutions.

We have seen how social media companies have a financial incentive to promote misinformation, whose algorithms feed a cocktail of conspiratorial content, sowing division and right-wing extremism. We have seen how mainstream politicians are loathe to call out far-right violence without equating it, nonsensically, with anti-fascist activism. Tragically, when a white-supremacist terrorist gunned down dozens of New Zealand citizens in mosques, we saw how far-right extremism in Australia can pose a violent threat to Australia’s neighbours. And while major news investigations and even a formal police inquiry have highlighted the dangerous rise of the far-right in Australia, we have yet to see any coherent public policy response.

This week, the Greens will introduce a motion to the Victorian Parliament to establish an inquiry investigating the rise of the far right in Victoria. It is a worthy proposal, but we need to go further.

A good first step would be a Royal Commission into far-right agitation in Australia, with powers to investigate links to foreign influence, social media, commercial interests and media platforming of known far-right agitators. The Morrison Government has typically equivocated on this question, preferring in the past to engage in both-sides-ism. But the Federal Liberals have a moral duty to show leadership in condemning the far-right, sending a clear message that fascists and fascism will not be tolerated in our country.

We need authorities to appeal to the public, as they did following the Capitol Riots in the United States, to help identify and prosecute violent agitators to curtail their influence.

We need public information campaigns to address information and political illiteracy; not just in schools where educators are already doing this work, but in the broader public sphere.

But crucially, we also need a rehabilitation strategy for our friends, family members, and workmates who have been entangled in conspiracies and dogma by these bad actors. Psychological health experts, educators, social workers and community groups should all be involved in programs to support people to escape far right radicalisation, and to address the root causes of economic disadvantage and social isolation. We need to unpack the factors that made those people susceptible to fascism - and I suspect we will find it's job insecurity, casualisation and a loss of control over their working lives and income.

This opinion was first published in The Age, 12 October 2021