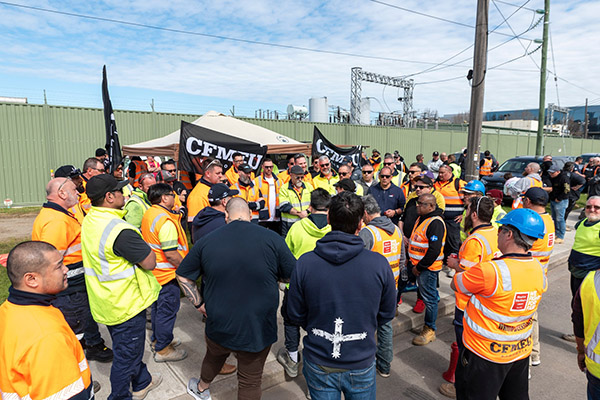 Workers at Knauf, a global plaster manufacturer in Port Melbourne, have been locked out of their workplace after voting down an agreement that would help to lower job security and help Knauf casualise the workforce.

We don't know how long the bosses at Knauf are going to keep the site shut down. This shutdown comes at a time when there is a shortage of plasterboard in Australia and Knauf would rather run down the industry than give the workers a fair deal. The workers want to go back to work.

The workers' union, CFMEU, has started a lockout fund for the workers during this lockout.

Can you help the workers outlast Knauf by chipping into the lockout fund?

Knauf is seeking to:

This is a bad deal for workers and the bosses at Knauf are attempting to scare workers by locking them out so the workers will back down and accept it.

Can you help the workers stand strong by chipping in to the lockout fund?

Every dollar raised will go directly to these workers to help cover their basic expenses while Knauf keeps them locked out of their workplace. Please give if you can.

Let's show the bosses at Knauf that the workers united will never be defeated.

No more workplace cover-ups As a courier franchisee, am I protected from heavy lifts? Super Scams VISY workers in Shep hit the grass How union members in one workplace made history... and will save lives.