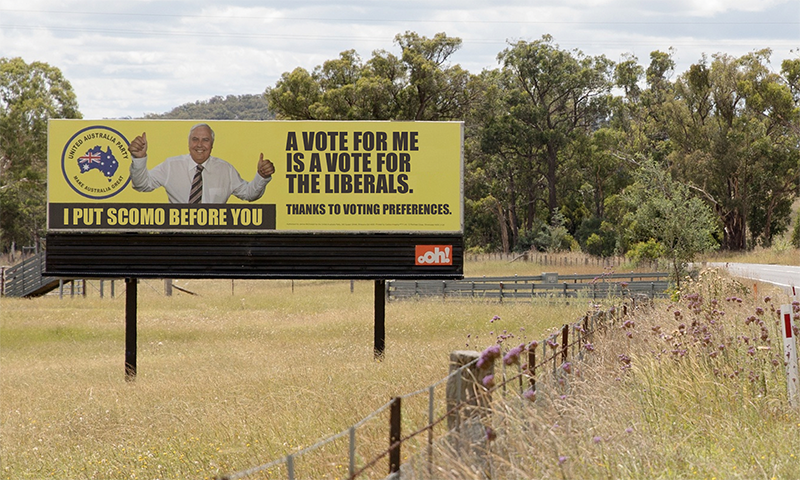 You might know Clive Palmer as a billionaire, buyer of yellow billboards, and one-term politician/ founder of the United Australia Party, but do you know his REAL story?

As a local boy, Clive Palmer cares a lot about helping his fellow Australians make ends meet. That’s why the stuff with a United Australia Party logo on it - from hats, to flags, to t-shirts and even our printed ads - is made in China.

The biased media might tell you that the decision to make his merchandise in China shows that Clive doesn’t actually give a shit about Australian jobs or “standing up to China”, but that couldn’t be further from the truth.

Yep - the workers at Queensland Nickel have nothing to say about Clive Palmer. Because he forced them to sign non-disclosure agreements in order to get the entitlements they were owed.

Sure, other people who have worked for him have described him as a “tyrannical bully” who abuses staff, sacks loyal workers at a whim and privately mocks voters when he’s not in front of the cameras. “I’ve got them all f–cked” he once said of voters he’d been shaking hands with.

But mostly, you’ll be hard pressed to find anyone willing to say anything about Clive Palmer, who, incidentally, is known as a serial litigant who uses his immense wealth to force his opponents to settle.

His company, Queensland Nickel, didn’t fail. It just made incredibly generous donations to his political campaign.

You might have heard that Clive Palmer’s company Queensland Nickel went into administration whilst also terminating the employment of nearly 800 people and robbing them of their entitlements.

What you may not have heard about is the generous loans the same company made to Clive’s “Palmer United Party”. Allegedly, over $189million was siphoned from the struggling refinery into various Palmer entities. Those loans were then forgiven - making them effectively donations.

Now, obviously, when a mine makes millions of dollars in donations to a political campaign, it can make it difficult to find the spare cash to pay for things like workers’ wages. So Clive approached the Queensland Government for a $35million bailout.

You can imagine how humbling that would have been for an avowed anti-communist like Clive - begging for taxpayer funds to pay the entitlements of workers that he was responsible for. That’s why he dragged the matter through the courts for years.

So when people tell you that Clive Palmer ran a significant mining venture into the ground and cost hundreds of jobs, you should set them straight! That mine might still be running today except for the generous donations it made to Clive’s political career.

The United Australia Party isn’t like the major parties

Clive Palmer has spent more than $31 million since August on political attack advertising for his United Australia Party, in comparison to the paltry $266,000 spent by the Opposition and $246,000 spent by the Federal Liberal Party.

Of course those fat-cat legal intellectuals in their ivory towers say that such spending is “obscene” and “dangerous for democracy” - but they would wouldn’t they?

Freedom! Freedom! Freedom! If they try to stop one multi-billionaire distorting our democracy and buying influence, what’s to stop them coming after all the other regular-Joe-millionaires, the next time you try to buy a seat in the house of representatives with your spare millions?

This article is satire… obviously. All facts have been checked and we have included links to news sources where appropriate.