The Premier's record on jobs 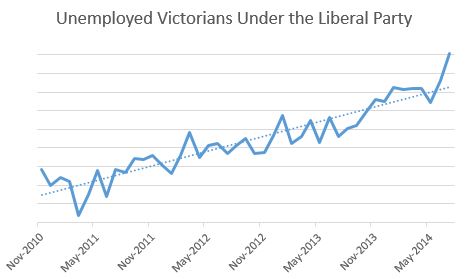 The latest job figures show that there are now 215,000 Victorians who can't find work.

An average of 46 people join the unemployment line every single day of this government.

Last week, workers gathered at Webb dock to protest the Napthine Government's decision to source materials for infrastructure projects from overseas, instead of providing jobs for Victorians.

The expansion of Webb Dock requires 25,000 tones of steel work - work which could be done by 300 workers at Keppel Prince in Portland with steel from BlueScope Steel. Instead, the Napthine Government is purchasing the steel offshore.

Here's what some of the workers at Webb dock on Monday had to say:

On the weekend, volunteers in Bellarine took this important news about jobs to the football.

"While handing out a leaflet at Geelong's home game tonight called "The premier drops the ball on jobs". The Premier comes along and I give him a leaflet saying there you go Denis. He was chuffed that I recognised him. Then his mates all laughed at him when they relised what the leaflet was about. Secruity were not far behind after that but it didnt matter we already handed out thousands. Haven't had so much fun all month!"

Volunteer with We are union