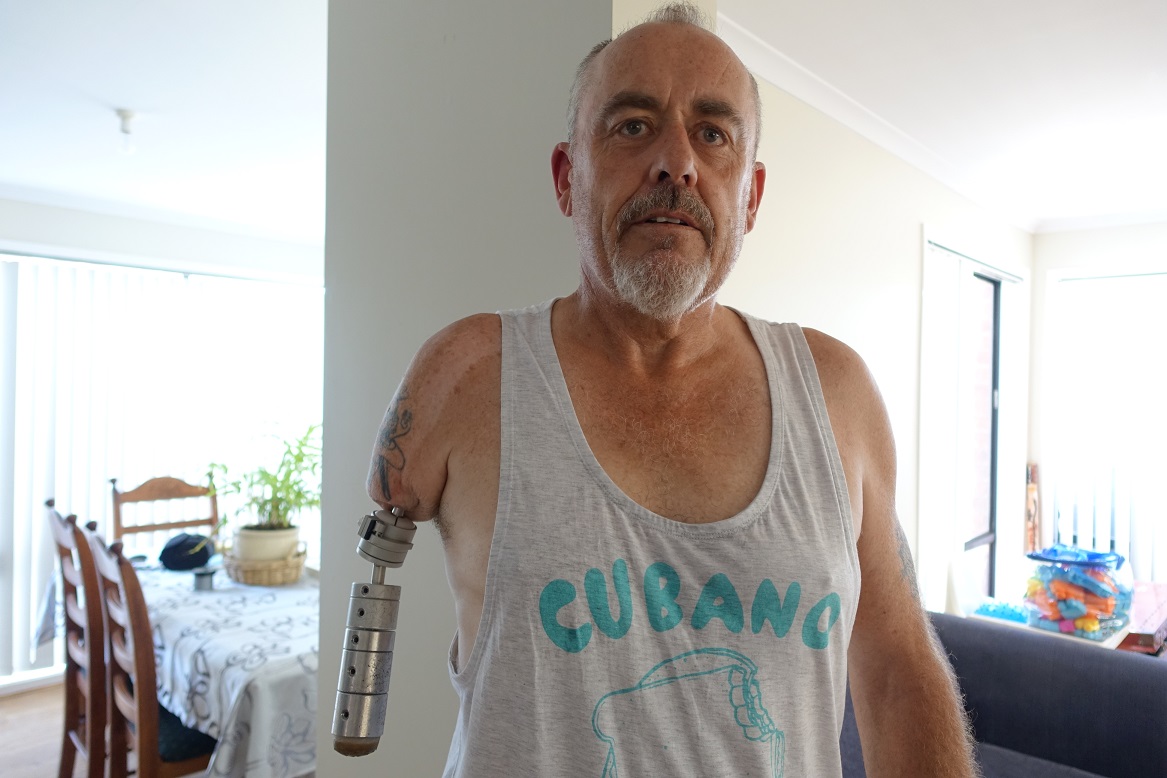 Gerald lost his arm while working as a machine operator on a rock crusher. It was traumatic, he said, but not as bad as dealing with the WorkCover insurance agents ever since.

What if you, or someone you loved, were injured at work? It might seem abstract; a problem concerning other people who work in loud, outdoor workplaces with heavy machinery that can maim and mangle human limbs. But workplace injury can affect anyone – more Victorians need workers’ compensation for psychological injuries than for fractures; Victorian workplaces see far more strains and sprains than amputations.

Which is not to suggest that these injuries are minor: a strained back can prevent a person from ever working – or playing sports, or holding their kid – ever again.

So if a crushed arm is too remote from your experience, imagine a loved one whose repetitive strain injury causes permanent pain, and who can perhaps not work for an extended period of time while they recover.

For many of us our work is part of our identity, so they may begin to feel adrift. They are likely to experience feelings of worthlessness and isolation. And then, inevitably, financial hardship.

Now imagine that the company responsible for assessing your friend’s insurance claim has a financial incentive to reject that claim – not just a general commercial interest, but a “bonus” for each claim terminated. That the company gives out a “top terminator” and a “top denier” prize. Imagine the company refers to injured workers cut adrift from compensation as “wins”.

Now, while your injured pal struggles with physical and psychological recovery, they must also face endless bureaucracy, legal hurdles, and appeals that make no sense. And because nobody wants to believe that such injustice is ingrained in our system, nobody really believes their story.

This is the reality for far too many Victorians. They go to work one day, suffer some injury at the hands of a negligent employer or unsafe environment, and are thrust into an unforgiving system that is stacked against them.

The Victorian Ombudsman’s report into the management of injured workers compensation claims was released this week, and offered a chilling insight into the issues plaguing our workers’ compensation system. Injured workers have long told us that the process of finalising claims through WorkCover can be traumatic, and some have told of their thoughts of suicide. Now we know that the source of the problem is not incompetence, but just a lack of regard for the wellbeing of the claimant.

Instead of assessing claims for compliance, the insurance companies engaged as agents by WorkCover are using scam tactics to avoid liability for the most costly claims; those where workers are permanently disabled by their injury.

To do this, they are “doctor shopping” to find medical examiners who will consistently reject claims, cherry-picking evidence and withholding information, talking to employers about claims, and drawing out the claims process in the hope of starving out claimants.

It is an abusive, sick perversion of our system. The compensation fund we established to protect injured workers allows wealthy insurance companies to profit from their misery.

The Victorian Government and WorkSafe should be congratulated on their quick response to the Ombudsman’s findings, in agreeing to implement all the recommendations. But for workers who have already fallen through the cracks, and for their families, we must do more.

Injured workers themselves are already standing up together, protesting against the five agents named in the report. Insurance companies are beating a hasty retreat.

Gerald has started a petition calling on the insurers to put an end to the culture that celebrates knocking injured workers off compensation.

When a worker is injured, research shows that 5% of the cost is borne by the employer who might have prevented the incident. 74% is shouldered by the worker themselves, and the rest, by our whole community. We all pay the cost of unsafe workplaces.