Geelong Trades Hall Council extends an invitation to current, past and future We Are Union Geelong and Change The Rules Corangamite activists to their 2018 Presidents Night.

Come along and celebrate and reflect on 2018 - a massive year for the union movement. Union members and activists have been pivotal in keeping a progressive Victorian State Government in power. Next year we have to harness our energies for the upcoming Federal Election, and make sure that we don't end up with an anti worker Liberal Government in Canberra or Corangamite!

But in the meantime lets share a few 'Tory smashing' war stories, some good food, and good cheer.  Come along and celebrate the huge achievements of the past year, and show solidarity with the union movement in Geelong. 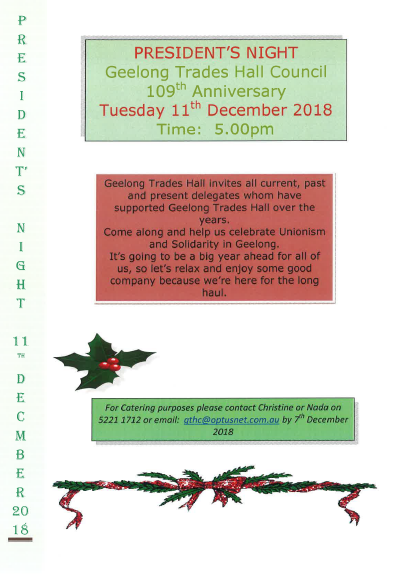