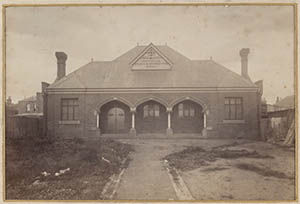 "A hall for female operatives, such as the  tailoresses who some years ago formed a union and joined the Trades Hall Council, has recently been erected."

Following the successful Tailoresses Strike in 1882, women unionists were growing in strength and in number. By the late 1880s, the role of women unionists had expanded to such an extent that the newly established Trades Hall Council agreed to the construction of a Female Operatives' Hall.

In the 1880s, women were largely excluded from public life. Victorian women had not yet won the vote. Women were not yet permitted to enter a public bar, or even a "ladies lounge" unless accompanied by a man. This was the context in which a separate hall for women trade unionists was deemed necessary.