We'll the recent union campaign to put the Liberals Last at the Victorian State election was massive!

And we did it. We defeated the Liberal party’s anti-worker, fear-mongering and conservative agenda with the collective efforts of unionists and activists across the State.

Now, we're turning our attention to defeating the Libs at the Federal election, especially the super marginal seat of Corangamite in 2019.

To keep the momentum going, we're having a nationwide pre-Christmas train station blitz. We'll be handing out candy canes and Christmas flyers to remind people about the Change The Rules Campaign.

We know that Christmas is a time of reflection, family and festivity. It's also a time of financial and emotional hardship for many people. For many working families its a time when the household budget has to stretch even further to cover extra costs. And its a time when many people work extra hours, especially in hospitality and retail jobs, many of whom had their penalty rates cut by the Turnbull govt, with the support of Corangamite MP Sarah Henderson.

We want to get the message out on the street so that people understand how and why we need to Change The Rules for working people.

Can you join us in the super marginal electorate of Corangamite for a morning of world-changing democratic action? 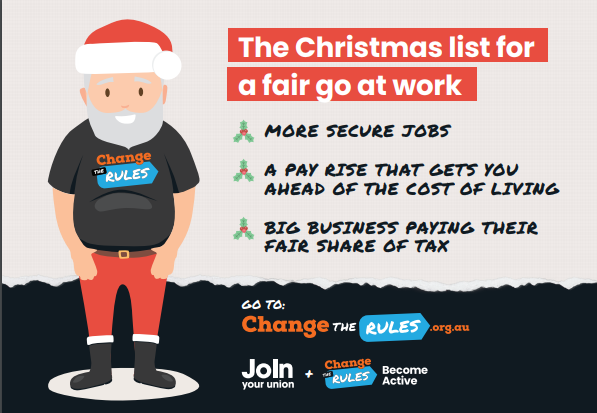